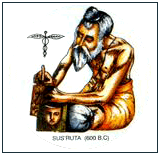 The Golden Age of Surgery in ancient India rests largely on the accomplishments of Sushruta, who lived about 600 B.C. Sushruta practiced and taught the art of surgery at the University of Benares (Varanasi, India) in the ancient city of the same name, located on the banks of the river Ganges. He is known as the Father of Surgery and Father of Plastic Surgery. His monumental treatise on Surgery, “Susruta Samhita” described reconstructions of the nose & ear lobes with use of tissue transfer techniques. In his Nasal Reconstruction, known yet today as the Indian Method, Sushruta transposed skin from the forehead to replace missing skin of the nose.

He was the First Surgeon to systematise surgery by dividing it into separate fields. He is known for cataract operation, laparotomy, and vesical lithotomy. He also described diabetes. Sushrut Institute of Plastic Surgery (SIPS) has been named after this propounder of Plastic Surgery who inspires us towards perfection & achieving new milestone.