The surgery can be performed on an out or in-patient basis under local sedation or general anesthesia. Usually the procedure takes 2-3 hours and you can go home either on the same day of your surgery or an overnight stay might be required. You will be able to return to your work after one week and perform all the normal work while heavy physical activities can be resumed after 4-6 weeks. 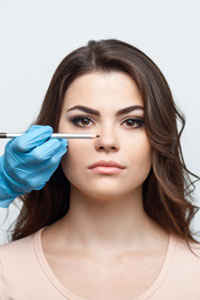 Your nose is the most prominent feature of your face, second only to your eyes. Its size and shape may be the most defining characteristic of your face. If you are unhappy with your nose, you’re not alone. Some people want a different size or shape. Others wish to repair change caused by an injury and some just want to breathe easier. If you have been wondering how nose surgery might change your entire personality you should schedule a consultation with a qualified plastic & cosmetic surgeon like Dr. R. K. Mishra. Rhinoplasty or nose surgery sometimes referred to as “nose reshaping” or a “nose job,” improves the appearance and proportions of your nose, enhancing facial harmony and self confidence. Surgery of the nose may also correct impaired breathing caused by structural abnormalities in the nose. This surgical procedure can produce changes in the appearance, structure, and function of the nose. There is not a universal type of rhinoplasty surgery that will meet the needs of every patient. Rhinoplasty surgery is customized for each patient, depending on his or her needs. Before making the decision about having a rhinoplasty, ask your surgeon if there are additional facial procedures that may enhance the effects of your nose surgery. Many patients elect to have chin or cheek surgery to balance their facial features.

The Procedure (view the procedure in 3-D animation)

The surgery can be performed on an outpatient basis under local or general anesthesia. The procedure usually takes an hour or two, although a complicated procedure may take longer. Most incisions are made inside the nose, where they are invisible. The skin and tissues of the nose along with the underlying bone and cartilage are sculpted by the surgeon to your desired new shape. The technique used will depend on the surgical goal. Incisions will be placed inside your nose. Sometimes a very short incision is made across the vertical strip of tissue that separates the nostrils called the columella. This technique is called an “open rhinoplasty”. The incisions used, will ultimately be very inconspicuous. Through these incisions, work is done on the cartilages and bone that form the framework of your nose. Sometimes, the position of certain bones may need to be altered in order to make your nose look narrower and straighter. If your nose needs to be built up in some areas, this can be done using cartilage graft, bone graft or an implant. The skin and soft tissues then re-drape themselves over this new framework. If the base of the nose is narrowed or the nostrils reduced, small wedges of skin at the base of the nostrils will be removed. Incisions are hidden in the natural crease where the nostril joins the cheek.

Are you a good Candidate for Rhinoplasty?

Common concerns among patients seeking rhinoplasty for nose size correction include a nose that is disproportionately large or small for their face. Others are bothered by a crooked alignment of their bridge and deviated to one side or an unnaturally high bridge (dorsal hump deformity) or very depressed & flat nose. Still others are more concerned about tip abnormalities (asymmetries), including bulbous or round tip, a tip that lacks definition or is poorly positioned. Some noses involve a combination of these abnormalities, while others have only isolated irregularities. Patients who desire refinement and reshaping of their nose and have realistic expectations may be good candidates for rhinoplasty.

After your procedure is completed, a splint, internal tubes or packing will likely be placed inside your nose and a splint or a small plaster placed on the outside to support and protect the new structures during initial healing. You will be able to perform your office kind of work from second or third day (obviously with a splint/tape over the nose, which will be removed after 2-weeks) . There will be some swelling & bruising discoloration around your nose & eyes, which will resolve gradually in 2-3 weeks time. But ultimate final shape & recovery may take 3-6 months or more.

You will be given specific instructions to follow during your recovery from rhinoplasty: How to care for the surgical site, medications to take orally to aid healing and reduce the potential for infection, nasal drops to instill inside the nostrils to aid healing, specific concerns to look for at the surgical site or in your general health, and when to follow up with your plastic surgeon.

Since the healing process is gradual, you should expect to wait up to six months or an year to see the final result. However your new look is visible within few weeks of your surgery. The results of rhinoplasty are permanent, except for possible changes associated with the normal aging process.

Ques.1: Can a chin correction be carried out jointly with a nose job?

Ans. Yes, it is minor extension of the operation. A chin correction takes not longer than 30-45 minutes and can be done in conjunction with a nose job 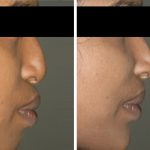 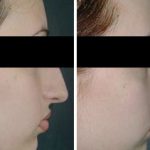 How much will a Nose Job or Nose Cosmetic Surgery Cost?